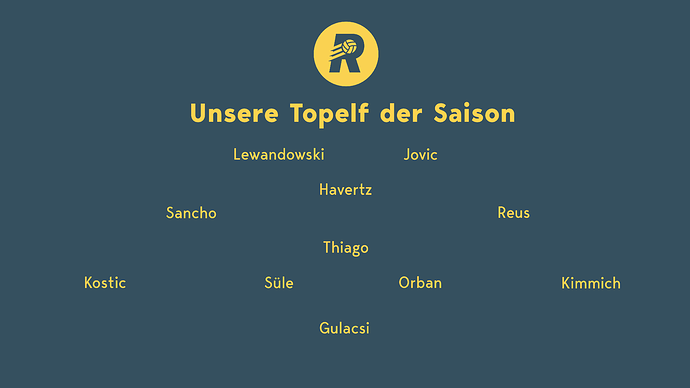 Thanks for the show. I enjoyed it for the most part, even though I agree with @nacho that Nele’s comments were a bit on the light side at times. Especially with respect to Schalke, her home turf, I’d have expected a more in-depth analysis of the game against Stuttgart and more background information about the current mood at the club in general.

I’d like to discuss the interesting issue of a club’s decision whether to continue the employment of their coach in a bit more detail.

When a club decides about the future employment of their present coach, they can theoretically look at four stages of their coach’s achievements: (1) their coach’s general career record of his lifetime’s achievements; (2) his hitherto achievements in his current position at the club itself; (3) their coach’s performance at present and the club <-> coach relationship; and (4) the club’s future sport and business expectations and (strategic) plans and their implications for the role and position of the coach.

Now, (1) is fairly uninteresting, generally speaking. The coach has already been hired and a his past achievements elsewhere don’t really allow the club to make an informed decision now about whether or not to keep him on (other than, say, perhaps to gain some new hope that he might still turn around a seemingly hopeless situation because he has done so a few times in his career already).

(2) is only a little bit more interesting. A coach’s success at his present club last season or the season before that is not a good indicator of whether he is the right man at present or for the future. What good is last season’s Europa League qualification when now you find yourself in 15th place and the players don’t seem to respond to the coach’s input anymore? And loyalty is generally not a good advisor in business. Save for the very rare situation when there is a special bond between a coach and a club (e.g. Jürgen Klopp in his latter stages at Dortmund), the club <-> coach relationship is a business relationship at arm’s length. A coach is not a member of a family, but a business partner with (usually) a short half-life who is very generously compensated for his troubles. So when a club deliberates whether to continue their coach’s employment, looking at (2) doesn’t really help. In fact, it might even be dangerous because it can lead to a wrong conclusion (e.g. keeping a coach out of gratitude).

(3) and (4) both are probably the key indicators when a club decides whether to continue with their present coach. In both cases, generally the same kind of questions have to be asked:

The essential difference between (3) and (4) is whether a club makes a decision for the present or the future. (3) is relevant when the club is in a state of relative stability without going through a crisis or phase of major transition, and (4) is pertinent when a club is in a situation of (voluntary or enforced) change or trying to define a new outlook on their football.

Therefore, in total, as we can disregard aspects (1) and (2) as proper input for a club’s decision making for lack of relevance, any club will decide on their coach’s continued employment on the basis of whether he suits or doesn’t suit their present or future understanding of ‘good football‘. As a matter of logic, it follows from this that not every coach who is perfect for a club now must be so in the future, too. By the same token, not every coach who is the best man for a club in the future must be so at present, too.

Considering all of this, all the recently discussed cases of coaches released already or to be released soon seem perfectly logical and explainable:

Markus Anfang at FC Köln? A case of probably (3) and certainly (4). I can’t say how well he got along with Köln’s management and his players, but he certainly didn’t fit the club’s present and probably not their future idea of good football.

Dieter Hecking at Gladbach? A clear case of (4). Max Eberl has stated that the club wanted to take the next step in terms of the quality of their football. They intend to establish a strategically more versatile and flexible kind of football for which Dieter Hecking doesn’t seem to be the right coach. He certainly has met the club’s expectations of what makes a good coach at present – he seems to have been liked by management and players alike –, but Eberl and Gladbach didn’t believe he would be the right man for their future ideas and strategic plans for their brand of football. Gladbach could have kept him on out of loyalty or gratitude (-> (2)), but they did not make that mistake.

Bruno Labbadia at Wolfsburg? A case of (3). For once, Wolfsburg is not in a state of crisis. There is some rare stability at the club, and Bruno Labbadia certainly fits Wolfsburg’s football expectations at present and would arguably have done so for the future, too. Unfortunately, he didn’t get along with the club’s management. So he might have been the right man for the present AND the future in some respects, but neither the present nor the future in others.

Pal Dardai at Hertha? A case of (3). Like Wolfsburg, Hertha is not a club in crisis or transition at the moment. For all I know, Pal Dardai got along well with the club’s management and his players and his style of football was also acceptable. Unfortunately, however, he never quite managed to accumulate enough points in the “Rückrunde” to ensure his continued tenure at the club. Prudently, Hertha did not fall back on (1) or (2) and hoped that, one day, he might finally break the “Rückrunde” curse or kept him on out of gratitude.

Heiko Herrlich at Leverkusen? A case of (3), certainly (4). Rudi Völler liked him a lot, but he appears to have had problems “in the dressing room“ and some players were against him. More to the point, his style of football didn’t find the pleasure of the club’s management and even though he may have reached the Champions League qualification the same as Peter Bosz now has, his football wasn’t considered right going forward.

What do you think?